Serving the community since 1937
webcontact@orindagc.org

Footprints of the past from our garden path 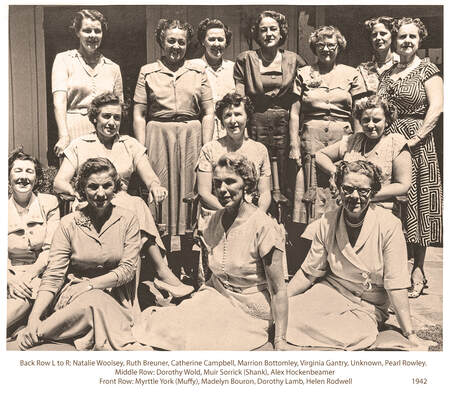 Click to enlarge
​In 1937, nine energetic Orinda women, each with a love of gardening, met for lunch at the Orinda Country Club. The idea of founding a garden club arose that day, but the structure of the club was established later in the garden of Dorothy Lamb. Members sometimes met at the country club to hear a speaker. On other days, often dressed in garden clothes, they went to each other’s homes. After two successful years, the club was enlarged as each founder invited two friends to become members.

​​In the early years, the club joined the community in civic planting projects, one of which placed hundreds of pine seedlings around the Community Church, along Orinda Way, and the Community Center. In 1946, the club planted cork oak trees and shrubs along Lake Cascade’s shoreline. Members carried home may blue ribbons from Oakland Spring Garden Shows. 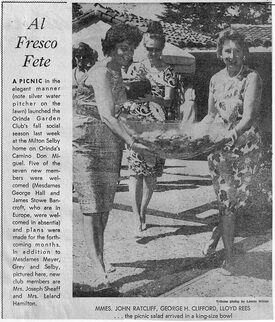 Oakland Tribune October 1964 (Click to enlarge)
In 1951, the club formed an affiliation with California Garden Club. In recognition of its early efforts, the club received many California Garden Club, Richfield and Sears awards.
​In 1980, the club incorporated as a tax-exempt organization and joined the Garden Club of America. The Orinda Garden Club has 80 active members and 50 associate and sustaining members who are dedicated to civic beauty, conservation, and horticultural education. The club selected Calochortus pulchellus (Mt. Diablo fairy lantern), a rare and endangered flowering plant endemic to Mt. Diablo, as its club logo.
​
For the past three decades community work has included the Highway 24 off ramp, Camino Sobrante triangle, Rose Garden at Heather Farms, Lake Cascade restoration, Crossroads container plantings, and monthly Bouquets for patients at the County Hospital in Martinez. Working with other garden clubs in Orinda, the club also provides flower arrangements for the Orinda Library, maintains containers at the Crossroads, and supports Orinda Library Landscaping.

Plant Sale 1993 (Janet Riley, Betsy Bingham, Sylvia Carter)
​Over the past 25 years, the club has undertaken many judged flower shows (An Open Book, Images or Orinda, Fiesta, In Concert, In Translation, and the GCA Annual Meeting Flower Show) as well as participated in major shows held by Visions of San Francisco at Gumps, Oakland Museum and Carmel.